The latest news to keep your mind and body fit

The Notorious RBG (Ruth Bader Ginsburg) Workout! Can You Do It?

Ruth Bader Ginsburg isn’t getting any younger. As the Jewish Supreme Court justice just turned 85-years-old on March 15th, many of her fans are praying that she lives through the Trump presidency.

It isn’t hard to tell how Ginsburg herself feels about the current political situation. In an interview with the BBC last week, she avoided mentioning President Trump by name — as she did last July, when she was harshly criticized for lambasting the former real estate magnate before the election — but said that the U.S. is not “experiencing the best of times” right now. She also said she is worried about the freedom of the press, argued that the current Congress is “not working” and praised the recent Women’s March on Washington. 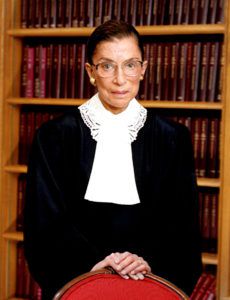 But she has already been a darling for a long time among liberals — who have recently started begging her to eat more kale and keep track of her bone density so that she might have a better chance of staying on the court for at least the next four years.

There is one thing that should calm these nervous RBG supporters: Twice a week, she completes a grueling, all-body workout devised by a former army reserves sergeant.

On Monday, Politico’s Ben Schreckinger published a first-hand account of what Ginsburg’s workout feels like. He met with Ginsburg’s personal trainer, Bryant Johnson — who also trains the court’s other Jewish justices, Stephen Breyer and Elena Kagan — and completed the Ginsburg workout in an excruciating 90-minute session.

“I’m no athlete, but I’m young and reasonably fit. I thought the workout would be pattycake, but it was much harder than I expected,” Schreckinger wrote.

Below is an outline of all the exercises Schreckinger mentions in his article. It may not make you wise enough to decipher a federal court case, but it will likely make you stronger. (Although, if you complete it while watching “PBS NewsHour,” like Johnson says Ginsburg does, you may have a pretty good grasp of current events.)

(All exercises include three sets of 10-13 repetitions)

COME IN EITHER LOCATIONS